What is COB LED Wall Technology?

A large LED Wall Display is combined from millions of LED module which one module represents one pixel on the screen display.

As pixel pitch is getting smaller than P1.8, the number of LED components will increase in a large amount. And the area of contact point for soldering will decrease dynamically which causes many issues. Issues like welding point is too fragile which will be broken by simple touch and cause heat dissipation problem as small contact point area.

COB (chip on broad) is the next-generation technology to come to solve these problems. COB LED Wall Display uses the latest high precision manufacturing techniques to direct die bonding LED chips on PCB and then add an epoxy layer to protect the bonding, which will save a few steps than SMD technology. Each step will eliminate the possible yield rate at that steps

As COB has continuous epoxy layer, which can provide high protection from dust, water, and impact force, while there are only has 4 soldering points between each individual SMD package and PCB

Flip-chip COB is the next generation technology advance in COB. Flip-chip COB will save the step of wire bonding, which results in a more higher effective luminous area under the same chip size, 20% energy saving & reduce temperature rise. As there is no bonding wire over light path block the light. 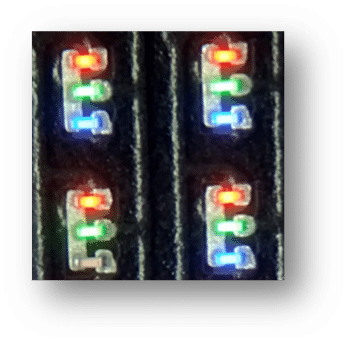 Flip-clip COB will have 40% larger luminous chip size, which can contribute to higher peak brightness up to 2000cd/m. Higher black occupancy contributes to 4 times higher contrast.

At the moment, only 3 manufacturers in the world have enough technology to own mass-production line of flip-chip COB, which is Cedar, Samsung, and SONY.